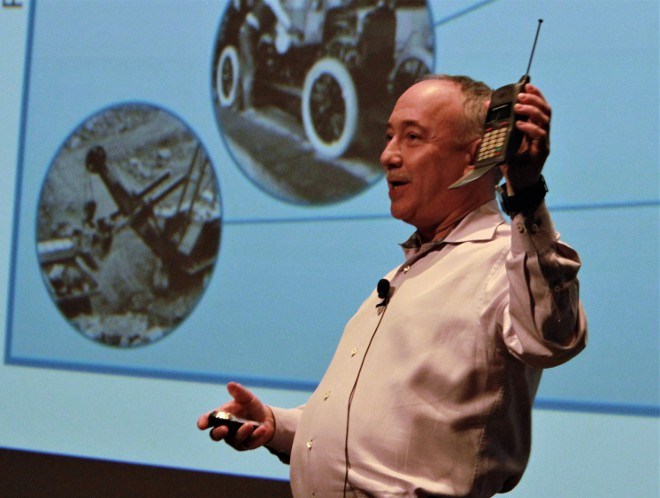 Nathan Stubina, managing director of McEwen Mining, gave an interactive presentation on the challenges of mining innovation at the Sudbury Branch of the Canadian Institute of Mining's Student Night on Oct. 18. He used his first cellphone to show improving on previous models does not equal innovation.

Is there really innovation in mining? And if not, how can the industry really foster technical changes for its long-term future?

Those were the main topics of discussion at the Student Night event of the Sudbury chapter of the Canadian Institute of Mining on Oct. 18, with speaker Nathan Stubina, managing director of McEwen Mining, Inc.

He gave an interactive discussion on whether or not mining innovation is an oxymoron, fielding questions from the audience to gauge perceptions and opinions.

The at-capacity audience at Dynamic Earth included about 90 students, most of them in mining and engineering programs.

The presentation itself was lively, peppered with humour poking fun at the stereotypes of mining, engineering, geology and chemistry.

Overall, Stubina said in later comments he was pleased with the lively reactions from the audience and was happy to see enthusiastic participation.

He said there is little innovation happening in the mining industry because it often borrows from other industries and adapts the technology. Those other industries, Stubina said, are also not innovating because they are just building on old models, some of which have their roots in centuries-old standards.

He quoted Oren Harari, a business professor at the University of San Francisco, who said “the electric light did not come from the continuous improvement of candles,” to demonstrate the problem facing mining.

“We are just using technology that was made decades ago,” he said. “There are those who are looking for ways to create new ways to approach problems, like Dyson and Tesla, but we are stuck in this mindset of adding to old technology.”

He used the example of how the measurement of four feet, 8.5 inches dictates a lot of designs. That measurement, he said, dates back to Roman chariots leaving ruts in roads. Transportation has been adapted to fit that measurement ever since, down to rail cars that transport rocket engines for the space shuttles.

Another little-talked-about issue facing mining innovation is the lack of perspectives.

This is to the detriment of the industry, as those people are more likely to look at a situation and see a different way to solve a problem.

This relates to the more-talked-about decline in the number of young people getting into the mining industry. Part of that problem is the perception of mining as a dirty, labour-intensive industry that's sometimes damaging to the environment.

The general population still has the visual of mining being the gritty prospector, with his pickaxe and mule, chipping minerals out of the rock, Stubina said.

Many mining logos still have elements of this. They have to change to reflect their willingness to embrace change and attract new perceptions.

“We know there are a lot of fields that can, and do, work with the mining industry, like robotics, design, programming, communications, but they are not advertising that,” he said. “If they want to really innovate, they have to be more open to talking to other fields and showing they are ready to change.”

On the number of students at the event, Stubina said it gives him hope to see so many young people interested in mining industries.

This is especially true for Sudbury, he said, with mining being integral to the very existence of the city and the spinoff service industries.

Stubina added he speaks to students at many universities in the mechanical, electrical and chemical engineering fields. Very few of them are aware they can apply their training to mining.

He added that talk from companies like Apple about bringing an end to mining through recycling is false rhetoric.

Not all materials can be recovered, and recycling old products will only add a small amount of material back into production. Demand is always increasing and only mining can fill that need.

“You see in places like India, where the middle class is going from 50 million to 500 million, that takes a lot of copper for housing, electronic supply, equipment, TV's; then talk about electrical vehicles and needing cobalt. I don't see mining going anywhere,” he said.