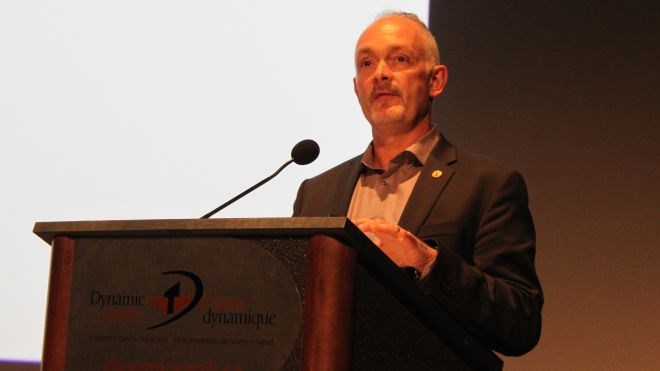 Jim Lundrigan, mine superintendent at Nickel Rim South Mine in Sudbury, recently spoke of his experiences attending the 2017 International Mines Rescue Body conference in Russia.

Coal mines are inherently dangerous places to work, and nowhere is that more evident than in Russia, where 570 fatalities were recorded at mining facilities in just four years, between 2006 and 2010.

But that dismal safety record has improved in recent years, as the country has put more effort and money into its mine rescue strategy, making it a model for other jurisdictions, noted Jim Lundrigan, mine superintendent at Nickel Rim South Mine in Sudbury, and chair of the technical advisory committee for Ontario Mine Rescue.

Lundrigan returned from the 2017 International Mines Rescue Body (IMRB) conference in Russia in midSeptember, with insight on what the Russians are doing right in mine rescue and how their work can inform Ontario’s own mine rescue strategy.

He urged mine builders not to think of mine rescue as an afterthought, but to include the requirements of mine rescue teams in the design of the mine itself. “If a mine’s going to be running for 30 years, the likelihood of something happening in that 30 years is very high,” said Lundrigan during a Sept. 19 presentation hosted by the Sudbury branch of the Canadian Institute of Mining, Metallurgy and Petroleum (CIM). “There’s going to be something that happens, so we need to be ready for it.”

But before they even go underground, all mine rescuers take standardized training in Novokuznetsk, Siberia, at a $1-billion, purpose-built national rescue training facility where they learn in virtual reality and real-life scenarios, in addition to undergoing intense physical conditioning.

Russian mine rescuers are well equipped with brand-new, state-of-the-art equipment to make their jobs easier and safer, he noted.

Rescuers wear a miner’s cap lamp with wi-fi connectivity and a camera mounted right in the cap lamp, allowing the team to transmit visuals of an emergency back to surface as it happens. Lundrigan brought one back with him that he said the Nickel Rim rescue team will try out to see how it performs.

The Russians are also using nitrogen vapour to fight fire in lieu of the foam Ontario rescuers use. The nitrogen displaces the oxygen and cools the fire, from up to 1.8 kilometres away, something that could be useful in the event of a fire on a battery-operated underground vehicle, Lundrigan noted.

But a highlight for him was the wi-fi-connected Dezega breathing unit. In an emergency, a blue light on the unit starts to flash immediately, alerting miners to put it on. Remotely, a control group can monitor which units are in use, what the rate of oxygen consumption is, and where the person is located. “It’s just an amazing little unit,” Lundrigan said. “Imagine being able to remotely monitor oxygen levels of each Dezega underground and what the consumption rate of the oxygen is. They actually had temperature probes for the rescuers as well.”

Lundrigan was equally impressed with how the Russians care for their workers. Rescuers undertake stress tests while wearing their breathing apparatus, and are monitored for oxygen consumption — what he called a “true stress test.” Lundrigan said Ontario Mine Rescue would look into working on something similar for the province.

In the aftermath of an emergency, the rescuers’ recovery is just as important, he noted. It’s not uncommon for rescuers, because of fear or stress, to bite down so hard on the mouthpiece of their self-rescuer that they break their teeth. So, dentistry offices have been set up in the mine rescue stations in response.

To help rescuers relax after an emergency, some mines have even installed salt rooms; dry salt aerosol is purported to clear nasal passages, soothe irritated eyes and throats, and improve skin conditions. “When I saw the amount of effort the Russians put into the people side of it, I thought, 'I feel woefully unprepared here in Ontario for how we were going to handle our rescuers after going down to fight a serious fire or a serious emergency,’” Lundrigan said.

But that’s why international co-operation remains so important: so different countries can learn and share best practices, he noted. “I know we can be better,” he said.