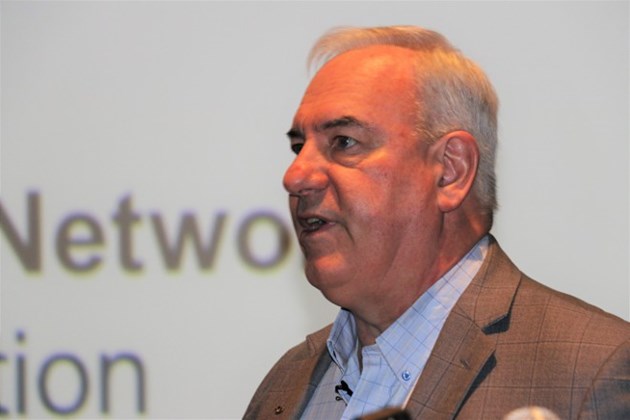 Douglas Morrison says Sudbury's mining sector has two choices: become a creator of change, or be a victim of it.

That message had the attention of a packed auditorium at Dynamic Earth for the March 21 meeting of the Sudbury chapter of the Canadian Institute of Mining.

The CEO of the Centre for Excellence in Mining Innovation (CEMI) explained long overdue major changes in operations are coming fast, but the industry is focusing too much on small areas like replacing machinery and digitization.

What really needs to change is the mindset of how entire mining operations are run.

“If we want to make the process more efficient, we have to start at the back, not the front,” Morrison said.

He related why this is important by talking about the start of his mining career in Sudbury in 1981, and they were using technology underground that had been there for almost 30 years.

A year later, mining operations were forced to shut down to allow mines to completely modernize operations. At the time, there was no set date as to when they would reopen.

It took about a year for mining to pick up again, but Morrison said the industry is at risk of having this happen again.

“Not much has really changed since 1982, and with the way the industry is now, we really can't afford another complete shutdown,” Morrison said.

He even went so far as to suggest more women would help change the mindset. Mining has been dominated by men, and he said the “male mentality” of having bigger, faster, slicker looking machines underground no longer works.

In a tongue-in-cheek fashion, he compared it to a woman telling her husband that he didn't need the biggest, loudest truck with numerous features for the sake of it when something smaller and more practical would do the job.

He ultimately had to skip over new tailings systems due to time constraints, but did say in light of recent disasters, CEMI is putting a priority developing safer systems.

The Sudbury Basin has been a hotbed for mining and mine service innovation for decades. To maintain that, the mining companies are going to have to look at other mine designs, Morrison said. He used the example of blockade mines, where they mine out low-grade copper ore, but average up to 100,000 tonnes a day per mine.

It sounds like an impossible goal, and Morrison admitted not all mines will produce that much, but they have to adopt a different approach to remain profitable.

When it comes to backfill, mining companies should be looking at methods like paste fill, a method that was pioneered in Sudbury and needs to be re-adopted on a larger scale, he said. It's twice as fast as other backfill methods and increases production values by 10 to 20 per cent, leading to lower cut-off grades, which will mean more ore and more mines.

Ventilation can be streamlined, with targeted cooling and even liquid air processes, Morrison said, pointing out projects like the experimental hydraulic air compression system just outside the building.

Mines should also be adopting high-performance production methods, such as autonomous machines.

These mines would employ fewer people – up to 25 per cent of the workforce now – but with more mines, Morrison believes there will actually be more employment opportunities available, and workers will have access to better and safer equipment.

“In the future, miners will have what are effectively space suits underground – completely self-contained air, digital information, safety mechanisms, heating and cooling – meaning we won't have to heat and cool spaces, just people,” Morrison explained.

Tailings systems, he said, will have a progressive closure and zero impact on their environment.

If these methods are adopted, mines will cut down on their two greatest expenditures: energy and labour.

It will also mean more value for the company, which will lead to more exploration, more mines, and more employment across the board, up to a sixfold increase locally and globally if Sudbury focuses on becoming a global mining technology centre, Morrison said.

And that has to start sooner rather than later.

Morrison predicted that 2022 would be a critical year for the city's mining industry, as mining ramps up around the world. Even with so many individual innovations, the industry at home has to start changing its collective mindset now, he emphasized.

“We are running the risk of having someone else come in and eating our lunch,” he said. “We can change now and own our future, or wait for someone else to do it and buy theirs.”