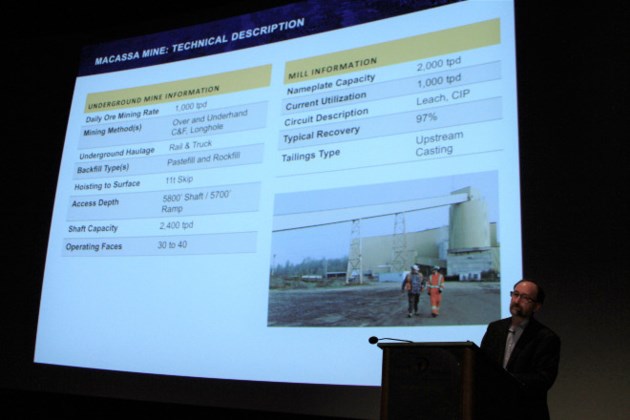 Pierre Rocque, vice-president of Canadian operations at Kirkland Lake Gold, was the guest presenter at the Canadian Institute of Mining Sudbury Chapter's monthly meeting on Jan. 18. The talk focused on the growth of the company, the acquisition of Australian properties, plans for more drilling, and the company's plans to have around 80 per cent of their underground equipment be battery-powered.

The vice-president of Canadian operations said among major changes, the company has moved towards having about 80 per cent of their underground operations at their mines battery-powered.

Rocque gave a light-hearted presentation at the monthly meeting of the Sudbury chapter of Canadian Institute of Mining, Metallurgy and Petroleum (CIM) on Jan. 18 at Dynamic Earth on a few updates on the mine, including the acquisition of Australian properties; progress at their properties in Kirkland Lake, including Taylor and Macassa mines; and the use of battery-powered equipment and biological means to extract gold.

“We've come a long way from a junior minor, to a mid-tier with properties around the world,” Rocque said.

As a highlight, Rocque announced the company is well on its way to its underground operations being primarily battery-powered. The company started purchasing battery-operated vehicles, which were retrofitted diesel machines, and have a fleet of about 30 pieces of equipment.

“I can say we are probably the single largest user of battery-operated equipment,” Rocque said.

Kirkland Lake Gold purchased vehicles with Atlas Copco (now Epiroc) and RDH at first, and they were retrofitted. They recently purchased pieces from Artisan, which Rocque said has only recently ventured out from car batteries to heavy industry. The company was in discussions with Artisan for about two years to purchase equipment, and the miner's latest purchase was a 40-tonne Z-Truck for Macassa, which was designed purely as a battery-operated vehicle, the first one created by Artisan. They expected to have it assembled and slung down into the mine by February.

“This is the Tesla of the industrial world,” Rocque said. “This was designed from the ground up to be powered by batteries. There’s no mechanical transmission, the engine is on the wheel, so off it goes.”

At Taylor, he said they view it as the poster child for electric mining, and have a four-tonne load-haul-dump machine in there that was delivered in December.

“People say, 'So you are going from diesel to battery, so what?' Well, the so what is our operations are moving away from diesel, and we’ve logged about 225,000 operating hours on battery-operated equipment,” Rocque said.

The equipment does not emit toxic exhaust, cutting down on ventilation costs and increasing safety. Financially, it will cost more in the short-term, especially with needing multiple batteries to keep equipment running, but in mines like Macassa, where it averages 25 degrees Celsius and the humidity is around 85 per cent, keeping temperatures down is a must. They tested the running temperatures of the battery-operated equipment and found it increased temperatures around six degrees.

New equipment will include internal cooling and on-board ejecting to make it easier to switch batteries between charges.

Rocque also touched on the company's Australian operations. At their Fosterville site, in the province of Victoria, they showed 1,900 tonnes per day, and grades and width of the ore body are increasing after the 1,000-metre level.

Production at this site is unique due to the deposit, which Rocque described as refractory, meaning the gold is in very fine particles in the ore and is difficult to extract with traditional chemical processes.

To recover the gold, they use a system called biological leaching, which he described as “little bugs in big tanks” that extract the gold using living organisms. This method, he said, is also cleaner than traditional chemical extraction, but has a major drawback: the organisms need to be kept between specific temperatures to stay alive and productive.

“We learned the bugs don’t like a few things, like when it’s below 20 degrees (Celsius), so we have to keep the temperatures between two bookends – not too hot, not too cold,” Rocque said.

Despite the fickle nature of the process, he said they are recovering about 90 per cent of the gold from the ore.