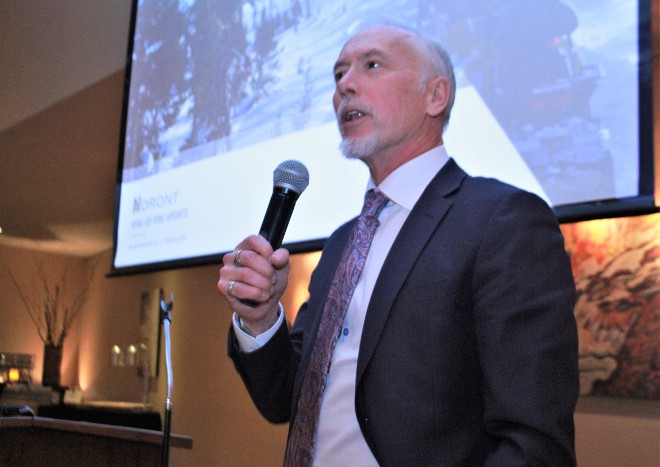 Alan Coutts, CEO of Noront Resources, addresses the audience on progress on the Ring of Fire project, including road construction progress, at the Winterlude event of the Sudbury chapter of the Canadian Institute of Mining, Feb. 21. (Karen McKinley photo)

If all goes well, the first load of ore concentrate could be coming out of the Ring of Fire by 2024.

But before that, a lot of variables need to be addressed. Most critically, government commitment to funding and permitting, as well as smelter selection and road construction.

Even then, Alan Coutts said Noront Resources has contingency plans for several scenarios. Even taking ore processing out of province, if need be.

He gave an audience gathered for the Sudbury chapter of the Canadian Institute of Mining's annual Winterlude event an update on where the corporation is at in their plan on Feb. 21.

The overview included the history of the find, geological makeup, timeline of progress, road construction updates and their commitment to Indigenous partnerships.

The CEO of the mining corporation said the company is feeling confident about the Ring of Fire being open for mining,with the help of recent government commitments.

He described the Ring of Fire as a 100-year opportunity, and the company has been doing its due diligence to ensure it is one that will benefit generations.

A critical part has been selecting a site for the smelter. The company is focusing on two sites now, Sault Ste. Marie and Timmins. Both have the infrastructure needed for smelting the chromite ore Noront will be mining. The Timmins site, owned currently by Glencore for its Kidd Creek Mine project, is slated to close in 2022, but the hope is Noront will take it over.

Coutts said Glencore has a closure plan it is staying with until Noront makes a final decision, but they are negotiating a plan in the event they are chosen to dovetail Ring of Fire operations into the smelter.

The proposed Sault Ste. Marie location is situated adjacent to Algoma Steel and has rail and water access, as well as space for ore storage.

A sticking point hovering over both sites is electricity. Coutts said Noront is confident they can come up with a power deal with the provincial government.

However, he did say they had been approached by Vale to process ore at their Thompson, Man. plant.

Coutts said that is a last resort, as they are committed to a made-in-Ontario solution.

It would also mean having to pay fees to have Ontario-mined ore processed elsewhere as part of the made-in-Ontario initiative.

“There are some very attractive power rates in Manitoba, but we are focusing on Ontario right now,” he said.

Coutts stressed Noront still needs a social license to operate in the area, so they have put a priority on Indigenous partnerships.

Webequie and Marten Falls First Nations are leading the development of the road to the Ring of Fire.

“We are no longer leading the development of the road, nor are we involved in the environmental assessment of the road and allowed our Indigenous partners and the government to oversee that,” he said. “This road affects them, as it will be on their traditional lands, and the engineering required to build a road across muskeg.”

The province is providing financial support, Coutts explained. The First Nations are engaging engineering firms to do the assessment work for them.

Noront is still responsible for the environmental assessment and permitting of the mine project at the site.

He stressed that without a permanent road to the Ring of Fire, the ore isn't getting to the rail line, smelter or market.

Coutts said the provincial government has given funding to help the First Nation partners start the permitting for large sections of the north-south road project.

There is a piece that does not have a proponent, yet, but Coutts said the government is negotiating with Webequie and Marten Falls to determine who will be the proponent, then finance the environmental assessment for the construction phase.

Noront owns 80 per cent of the claims in the Ring of Fire.