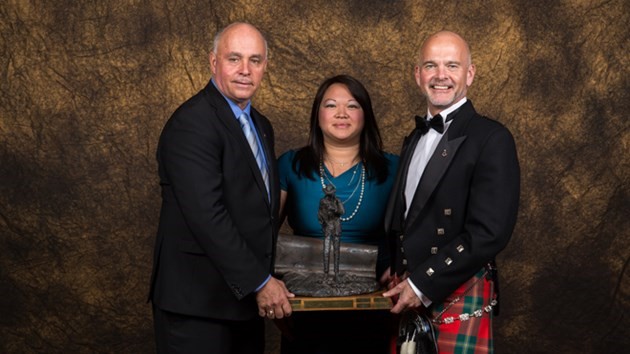 Representatives of the Sudbury branch of the Canadian Institute of Mining, Metallurgy and Petroleum (CIM Sudbury) received the prestigious Mel W. Bartley Outstanding Branch Award at the organization's national convention in Vancouver.

Representatives of the Sudbury branch of the Canadian Institute of Mining, Metallurgy and Petroleum (CIM Sudbury) received the prestigious Mel W. Bartley Outstanding Branch Award at the organization's national convention in Vancouver.

Branch chair Trang Tran-Valade said she is very proud of her executive team, which implemented a number of new activities for members over the last couple of years. “Our membership was very supportive of the programs we introduced at monthly meetings, including a concerted effort to step up the mentorship of future mining professionals,” she said in a press release.

Tran-Valade said college and university students who attended local branch meetings benefited from fun but effective ice-breaker activities that connected them with seasoned industry professionals and learn about various facets of the industry. “Many of those mining professionals have become mentors to the students,” she added.

The Mel W. Bartley Outstanding Branch Award is given annually to the local branch judged to have made the most progress toward achieving the aims and objectives of the national Institute. The award is named after the 1976-77 CIM president and established in 1977 by the CIM Thunder Bay branch.    Several other Sudburians active with CIM were also honoured at this year’s national convention:

During its regular membership season, CIM Sudbury features several keynote speakers from across the country, and hosts a number of networking and social events. CIM Sudbury is proud to host a major industry event, the Maintenance, Engineering & Reliability/Mine Operators Conference and Exhibition (MeMO 2016), to be held at the Radisson Hotel Oct.16-18. For more information about CIM Sudbury and the upcoming MeMO 2016 conference and trade show, visit www.cim.org/